Whitney Parnell grew up between Latin America and West Africa as the daughter of a Foreign Service Officer. At Washington University in St. Louis, Whitney embraced her calling as a “professional humanitarian.” Whitney’s passion for service and social justice brought her to Washington, D.C. to serve with the Americorps Program, City Year. After two years of service, Whitney worked in homeless services, which included creating her organization’s Community Engagement Program, and managing the Street Outreach program. Whitney is excited to create a movement of service and allies through Service Never Sleeps by igniting quick social change through mass civic engagement. 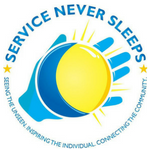 Service Never Sleeps is based on an "Eight-Hour Dream" concept that Whitney developed: If she went to bed amidst the current state of social injustice, and a fraction of society did something small to make a difference, she would wake up after a full night's sleep to witness tremendous social change. Whitney gathered a team in January 2015 and went full-time with Service Never Sleeps that fall, after receiving the opportunity to be incubated by the Aspen Institute. Service Never Sleeps became an independent nonprofit in Fall 2016, launching a yearlong Fellowship of part-time service for millennial professionals through a corporate partnership model to facilitate service opportunities and a community Allyship training for their employees.