Jenny Wang is the Co-Founder & CEO of Petite Studio NYC. She is a self-taught fashionista with a passion for fashion and an eye toward aesthetic. She was raised in Zhejiang, China where she lived until the end of her undergraduate education. She came to the US to study Real Estate at New York University, but ultimately followed her dream to build the first petite-specific, high-end fashion line. With no background in fashion, she taught herself entirely on her own and surrounded herself with a small group of highly qualified fashion professionals.

Matt Howell is the Co-Founder, CFO & COO of Petite Studio NYC. With a background in finance, Matt found himself in fashion entirely by chance. He spent the entirety of his 10-year finance career in NYC, first in investment banking, followed by eight years in public / private credit & leveraged finance. Petite Studio was initially a side job for him, until it grew to the point that it demanded his full time attention. He oversees all operations, fundraising, budgeting / financial modeling, and a majority of management responsibilities. 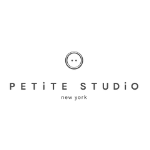 Petite Studio was founded to provide petite shoppers with a level of thought and care they cannot get anywhere else. Petite Studio creates investment pieces that are designed and produced to last for many years. It embraces slow fashion principles that require extra time, effort, and resources to produce a superior garment. Petite Studio's chic seasonal collections are designed for the fashion-oriented female shopper.