​Jeff Johns brings tremendous acumen in leadership and business development as CEO of Impact Foundation. Previously at National Christian Foundation, his team grew annual contributions from $40 million to $850 million, raising more than $4 billion for Kingdom impact and positive change. Jeff also worked in the global generosity space, focusing on Asian markets. His board experience includes The Gathering, Seed Company, and Axis ministries. He earned a BA from Duke University and an MBA from the University of Texas at Austin. Jeff is an instrument-rated pilot and collegiate national skydiving champion. He and his wife, Jacqlyn, raise three lively children in Albuquerque.

Aimee Minnich is Co-Founder of Impact Foundation. A recovering attorney, she helps vet and structure the Foundation’s investments and coaches charities on ways to further their missions with the addition of earned revenue. Previously, Aimee spent six years as President of National Christian Foundation Heartland, leading the staff and serving donors. Aimee hails from Kansas City, where she graduated summa cum laude in philosophy and earned a JD with honors from the University of Kansas. She has authored The Profitable Charity, some boring law articles, and an examination of the metaphysics of salvation. Aimee and her husband, Marshall, have three adorable kids. 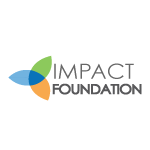 Impact Foundation believes that business with purpose has the power to do more than charity alone. Purpose built for impact investing, we provide a streamlined way to use charitable capital to fund transformational businesses, make loans to charity, and grow the amount you have to give away. Over our first three years we have been able to put over $50M of charitable capital to work in over 90 investments.