Hudson Baird is the Co-Founder of PelotonU and Executive Director. Hudson’s passion for economic opportunity began in a fast food kitchen where he spent college summers working alongside peers who held two jobs, loved their families, and rarely made it home for dinner. There was not a clear path to middle class employment, no matter how hard they worked. These people were justifiably frustrated, because the American Dream had failed them. A native of Austin and Vanderbilt University alumni, Hudson helped start two other social enterprises before PelotonU. An only child, Hudson is happiest fly fishing or mountaineering.

Sarah Saxton-Frump is the Co-Founder and Chief Operating Officer of PelotonU. A Brown University alumna with a Master’s in Education Administration, Sarah worked in low-income high schools for eight years, first through Teach for America and then as a KIPP teacher and principal. At KIPP, she helped grow the school from start-up to maturity and is skilled at crafting high-quality curriculum and developing systems to support students. Originally from New Jersey, Sarah never imagined living in Texas for 11 years. Still a Yankees loyalist, she has lately discovered a love for baking naturally-leavened bread and Anne Sexton’s poetry. 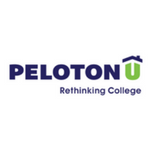 PelotonU has reinvented college for the working adults who comprise over half of today’s students by leveraging the flexibility of online universities with the support of in-person coaching. Founded in Austin, PelotonU has served 117 students who have earned 27 degrees, all while maintaining an 80% persistence rate with 90% of students on-pace to graduate on time. Beyond Austin, PelotonU has taken their model to McAllen, Texas where 89 students are pursuing their degree, won an OpenIDEO competition to redesign higher education, and presented at SXSWedu and ASU-GSV. Their work has been featured in Forbes, EdSurge, and The Chronicle of Higher Education.